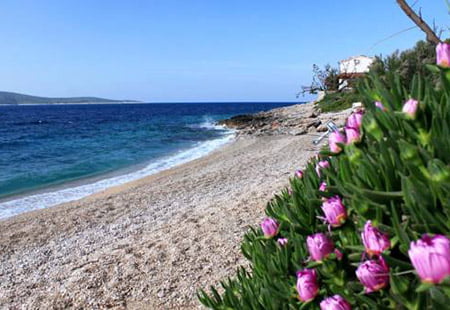 Located on the southern shore of , Zavala Hvar Island is truly far away from the noise and crowds of the more well-known tourist locations of the island.

Stunning pebble Zavala beaches and sparkling waters abound near this village, making it the perfect summer getaway and one of the most desirable destinations on the island.

Facing the small island of Šćedro, Zavala Hvar is a small fishing and agricultural village with a long history, dating back to the 15th century.

The village is named after Cape Zaca, which in Croatian means small bay.

The village itself is beautiful, with rustic Dalmatian stone houses in the older part, narrow, cobbled streets, and a stunning view of the island of Šćedro and Korčula, as well as the Pelješac Peninsula.

Zavala village was first settled in order to serve the needs of its larger neighbor Pitve.

However, later Zavala Croatia became an independent village and developed into a tourist destination.

Today, the village has a total of 144 permanent residents, but a stream of visitors that come to the village throughout the year.

Of course, the summers are when the village is most populated.

The slopes are adorned by neat rows of vineyards, and scented and beautifully blooming oleander flowers.

Zavala beaches line the coast and the waters of the Adriatic Sea sparkle in the sun.

There are now a number of restaurants in the Zaval Croatia, all serving delicious local Dalmatian cuisine that is a delight to the taste buds.

And in the evening, you can take a walk down the village’s seaside promenade and watch the spectacular sunset.

Zavala beaches abound, located one after the other all along the coastline.

These are pebble beaches, and all of them have clear, astoundingly clean waters that are shallow enough for children to enjoy the sea.

The most favored beach of all is Gromin Dolac, which can only be reached if you travel down the gravel road from Zavala Hvar island and head east.

Isolated (but it won’t be for long, since word of its beauty is spreading fast), this is truly one of the most breath-taking Zavala beaches you will ever visit.

Surrounded by pure nature on all sides, Gromin Dolac is that picture-perfect beach you see in the most beautiful pictures.

Another stunning beach to visit is Petraščica beach.

Petrašćica beach is located near a cave and is pristine and perfect.

With the abundance of nature all around the village, Zavala Croatia is fast becoming a mecca for adventure sports.

Another one of the rare places where adrenaline junkies can indulge in free climbing, visitors can also go cycling, hiking, trekking, scuba diving, snorkeling and surfing.

That is, besides beach volleyball!

The trials for bikers come highly recommended, which are challenging enough to make them worth the visit to Zavala Hvar Island.

You can even go fishing in the sea and catch your own dinner – just as they did in the old days.

Just opposite the village is the small island of Šćedro, which is a protected nature park.

The island is inhabited by a single family.

Lucky for you, the Kordić family is very warm, welcoming and immensely hospitable.

So, you can take a boat over to that island and enjoy that family’s hospitality.

The Mostir cove is another place you must visit while you are on the island. And the remains of the Dominican monastery which dates back to the 15th century.

Here, on the first Wednesday of every July, there is a Holy Mass that is held in honor Our Lady of Mercy (Gospa od Milorsđa).

This day is known as the Fiesta on island of Šćedro, and is celebrated with the best of local wines, Dalmatian foods and clapa singing.

If you are around Zavala Hvar at that time of year, then do make it a point to attend the Holy Mass and fiesta.

It is an eye-opening look into the local tradition.

With vineyards spread across the hills behind Zavala Croatia, it is but natural that you will want to sample some of the excellent local wines.

You can go on wine-tasting excursions and sample some of the local delights of cheeses and olive oils while you’re tasting the delicious wines.

The Bogdanuša wine (or Bogdanjuša) is world famous, exported to many countries across the world.

Day Trips from Zavala to Nearby Villages

The villages of Ivan Dolac and Sveta Nedilja are located in the immediate area, and day trips are organized to visit these lovely little hamlets.

You can even visit Jelsa from here, though it is a longer trip than those to neighboring villages.

When you are in Zavala, you must visit the house of Duboković Nadalini.

Built in 1830 in the Biedermayer architectural style, it houses the remnants of multiple old structures, as well as the Chapel of St. George.

The chapel was built by Bishop Juraj G. Duboković back in 1866.

The bishop was one of the founding members of the Hygienic Society of Hvar island, the organization that was almost single-handed responsible for turning the island around and making it one of the most attractive tourist destinations in the world.

Bishop Duboković’s heart has been buried inside this chapel.

If you are a fan of brandy, then you must try Travarica herb based spirit, called the king of all rakija.

Rakija is the Croatian term for all distilled spirits. It is renowned as an excellent digestive aid as well as a tonic!

Travarica is made from distilled grapes, which are then infused with numerous herbs, such as lavender, rosemary, chamomile, juniper, thyme, rose hips, sage, mint and so on.

And Zavala Hvar is where you get the best Travarica!

Another must try is the village’s honey – made from lavender, sage and rosemary.

The scent of this honey itself is so heavenly, you can only imagine how good it tastes!

Where to Stay in Zavala Hvar ?

There are some lovely guesthouses, apartments, rooms, luxurious villas and campsites at which you can stay in Zavala Croatia.

All the houses are built on a hillside facing the sea, so you have a spectacular view no matter where you stay!

Getting to Zavala Croatia

Getting to Zavala on Hvar island is an adventure in itself.

You can travel there directly by boat and dock at the village’s tiny little harbor.

The more traditional route is by first getting to Jelsa from Split, and then going through Pitve.

From Pitve you have to take Pitve tunnel 1.5 km long tunnel – it’s dark and almost mine-like, says one traveler.

Once your exit the tunnel, you have to take a long and winding road down to the village!

It is the first settlement after the tunnel, and is a hidden jewel.

In summer months, traffic in the tunnel is heavy, so be prepared for a long journey of a few hours before you get to Zavala Hvar Island.

Zavala Croatia does not offer you a swinging nightlife, or tons of touristy things to do.

What is does offer you is pure nature, peace, stunning views and a time to relax and get away from the worries of the world.